For four days scholars from ten countries met in the lovely salon of Schloss Wahn to discuss imperial formations and how they can be studied in comparative, entangled and/or global histories.

We focused on actors, personal networks and specific localities, especially on the less “typical” imperial situations that are often marginalized in historical scholarship on empire. 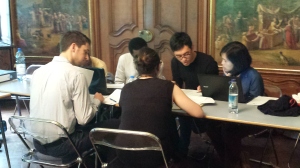 However, despite this attention to historical specificities we analyzed imperial formations in a broad geographic and chronological framework, from the Spanish conquest of the Philippines over early modern colonialism in North America to high imperialism and processes of decolonization in various parts of the world.

Lively discussions on theoretical concepts like the “imperial cloud”, “colonial knowledge production”,  or “settler imperialism” allowed us relate different imperial projects to each other. Our guest lecturers offered their own theoretical and methodological perspectives on imperial formations. Besides that we also learned new things about travelling maharajas, lonely telegraphists, and strawberry-planting naval officers.

Thanks to all of you for your participation and contributions. You have turned the 4th GRAINES summer school into a full success!